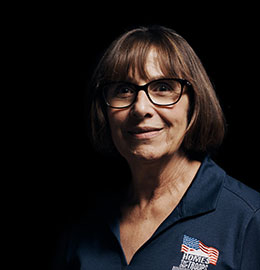 Cindy is a 9/11 family member who lost her husband, Michael McGinty during the September 11, 2001 terrorist attacks at the World Trade Center in NYC. Mike was a 1981 graduate of the United States Naval Academy and worked for Marsh McLennan.

A graduate of the University of Connecticut, Cindy worked in the insurance industry in Human Resources and Health Claims for over 15 years. She then left the work world to raise her two sons and later turned her skills to volunteer work with her church and school community. Cindy is a founding member the Massachusetts Military Heroes Fund and was also on the Family Advisory Committee for the Mass 911 Fund. Currently Cindy is the Development and Marketing Chair for the Connecticut 4-H Development Fund at Auerfarm, President of the McGinty Scholarship Foundation a CORE Ambassador for Homes for Our Troops, and is on the is on advisory committees for the Dublin School and the Foxborough Regional Charter School. Cindy believes deeply in the idea of community service, volunteering and helping family members to remember their lost loved ones.